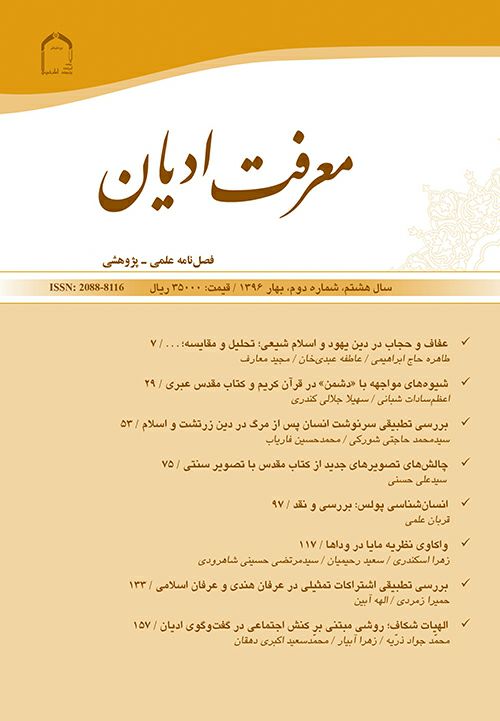 There are similar Biblical and theological concepts and terms in Islam and Christianity, whose semantic coincidence needs an in-depth analysis. Logos in Christianity and the Word in the Quran are among these terms that considering the philosophical background and theological application of Logos, appear to have no common meaning, while the original texts of both religions reveal a semantic relationship, although they may not be exactly the same. This comparative study provides a deeper understanding of the sacred texts of both religions. Both in the Quran and in the New Testament, there is a tangible relationship between the Word and the "Holy Spirit" or the "Sprirt". The Holy Spirit establishes an interconnected relationship between the world of Divine Command and the world of creation. All the destinies of creation are documented in the Divine world, all of which are in the form of the Word, and the "Sprirt" is able to pass through a cosmic domain and act in the other cosmic dominion through the heavenly brokers (angels and other means).

The issue of the human rights is considered as a means of assessing and valuing man in the 21st century to the extend that due to the expansion of its legal dimensions towards politics, security and sovereignty is about to become a norm and standard in governingـــــــ an unjust standard that isolates all types of criterion and understanding, even religious and civilized understandings. The most basic concept behind the contemporary human rights is the human dignity. Conceptual analysis of th human rights based on dignity leads to hidden challenges that have so far not been discussed. While analyzing the identity of human dignity, its status, and the implications of the human rights, this paper examines the critical human rights studies that historically criticize the theoretical foundations, methodology, value creation, legal normalization, functions and the human rights in the current world. The function of the conceptual analysis, is recognizing the network of knowledge and making a functional alignment between the common human rights literature of Islam and Christianity.

A Comparative Study of the Ethical System of "Islam" and "Tao"

A comparative study between the principles and ethical teachings of Islam and Tao initiates a new perspective on the dialogue between the heavenly and non-heavenly religions. Using a desk-research method, and focusing on the main Islamic and Taoist texts through a comparative perspective, this paper studies the similarities and differences between Islamic and Taoist ethical foundations; the foundations such as, the criterion of good and evil, the necessity of having a moral life, the cause of the good and evil, and also, the relativity of moral teachings. The comprehensiveness of the moral system of Islam in all worldly and other worldly aspects besides its social perspective, and the passive and one-dimensional and worldly Taoist perspective on the moral teachings are among the main differences between these two religions. The existence of an ethical ideal man who is the embodiment of good morals and the founder of utopia, are among the most important similarities between Islam and Taoism.

The Ultimate Perfection of the Christian Faith and its Outcomes

An important theme of all religions and schools, is the ultimate perfection and happiness of man and its outcomes. This issue has also been raised in Christianity, as one of the heavenly religions. Getting close to God and uniting with Him is the ultimate perfection of man in the Divine religions. This paper studies the final perfection of a Christian believer and its outcomes in the Bible and its commentaries, especially the official theology of the Church. The perfection and happiness of man in Christianity, which is unity with God and Christ, are granted [by God] through the atonement of Jesus, not the people themselves or their deeds. Some of the worldly and otherworldly outcomes of the Christian ultimate perfection are, lightning, succession of Christ, the authority over the affairs, receiving the Holy Spirit, and a blessed sight. Recognizing the achievements of God seekers, familiarity with the other Divine religions, realizing the dialogue between religions, and uniting the Divine religions against atheism have been considered in this research. This paper, studies the final perfection in Christianity and its outcomes through a theological approach than a mystical one.

One of the Krishnamurti's fundamental views is summarized in this statement, "The truth is infinite and unlimited; inevitably, it cannot be propagated in the form of a definite and ideological form. Accordingly, the critical analysis of this claim is the main issue of this paper, which has examined this claim in two propositions, 1. If the truth is of an infinite nature, there is no way to be comprehended. 2. Because, there is no definite way to reach the truth, it cannot be propagated in the form of a teacher's advice or ideology. Analyzing this view, we refer to two points, first, given the nature of happiness, the infinite nature of the truth and its subjectivity do negate the role of master. The second point is that, there is a paradox in Murti's claim, because his idea contained the negation and proof and a kind of confusion.