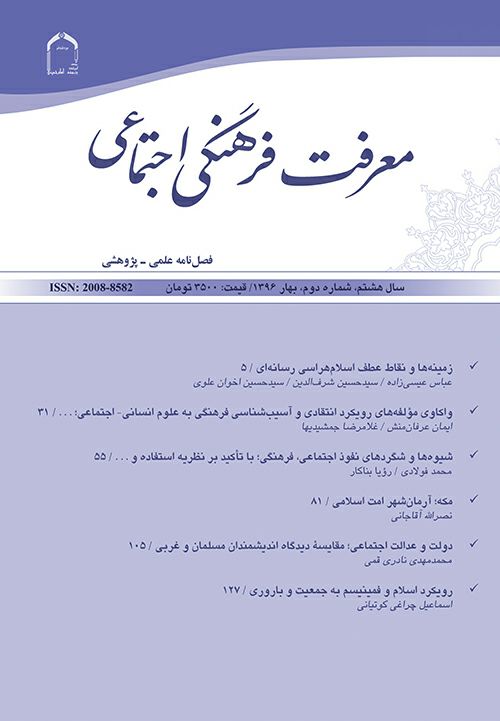 The Concept of Structuralism; a Review of Levi Strauss and Saussure's Ideas

Structuralism is one of the complex theoretical and influential trends in the field of social studies. Many important thinkers of sociology like Karl Marx, Emile Durkheim, Bourdieu, Anthony Giddens and many other theorists have been especially concerned with structuralism and have made great efforts to expound this trend or leave it a side. The aim of this paper is to resolve the ambiguity about this influential and intellectual mainstream and address some of its theoretical principles with reference to a number of eminent classical thinkers, like Saussure, Levi Strauss, Barthes, Louis Pierre Althusser and Jacques Lacan. The basic issue in structuralism is human subject and priority of structure over agency. All advocates of structuralism, including linguistics, anthropology, mythology, and structural Marxism, deny human subject giving originality to structure rather than to agency. But, in terms of methodology, this school of thought is based on certain principles and preliminaries, which if not observed, structuralist results cannot be obtained. The important parts of these principles are studied in the present paper a reference to the views of two of the most important thinkers (Levi Strauss and Saussure) is made.

Social phenomenology is a new theory which seeks to give form to the philosophical principles in regard to sociological issues without bringing any harm to its philosophical origins. The overall findings indicate that Quranic verses approve some of these propositions and disapprove or expound on some others.

The output of the propositions of this theory include social reality, constructive elements of vital world, our relations, there relations, meanings and motives, social interaction and deputable situations.

Analyzing these propositions will introduce us to fourteen propositions some of which are used in comparison with Quranic propositions. The method of this study is to compare between the propositions and to know the Quranic view about this theory without imposing meanings on verses.

People's acceptance of the  guardianship of jurist has a historical trend and most efforts to present it to society began from the Mongol period which was simultaneous with the downfall of the caliphate governments in which such great scholars like Shahid Awwal, Khaja Nasir al-Din Tusi, Allameh Helli and others played a major role.The public became familiar with this issue more and more with the victory of the Usulyya( fundamentalists) during the Qajari period and political - religious guardianship of scholars was established during the Qajari government. In the Tobacco and Constitutional movement, guardianship of jurist became pervasive and international. The Islamic Revolution of Iran represents a perfect example of guardianship of jurist whose social foundations were established by former scholars.

Having influence in the Mongols' rule and then making the Mongol's ruler convert to Shi'ism, exercising authority, in the Shi'ah governments of Saffavids and having an active role in the community, Shiah scholars were able to introduce to society the idea of guardianship of jurist along with the political guardianship of governors.

The relationship between theory and observation is among the subjects to which various schools of social sciences give different responses based on their ontological and epistemological views. Due to the different viewpoints existing in Islamic philosophy about the resources and means of knowledge on one hand and about the levels of reality and knowledge on the other hand, the nature, theory, observation and, naturally, the relationship between theory and observation will be different. From the viewpoint of Islamic philosophy, there are different types of theory, empirical, rational, intuitive and transformational, and each type can have critical and normative dimensions. Obviously, each category of these theories belongs to an appropriate source and its character is evaluated . Therefore, "observation" alone is not a suitable source for any of these theories and a "test" can assess only some aspects of empirical theories.

Informal Social Control from the

Perspective of Qur'anic Verses and Hadiths

This research seeks to study informal social control in religious texts. According to this research, informal control is considered as an effective control lever in Islam. Religion sees that dreams and aspirations affect behavior, and religious beliefs such as reward and retribution in the Hereafter can promote harmony among people. Also control levers such as modesty, fear, praise and blame, watchfulness, enjoining good and forbidding evil lead to the decrease of deviation.

Qur'anic Teachings and a Critique

of Durkheim's Theory about Religion and Social Cohesion

This paper introduces, through an analytical and documentary approach, Durkheim's theory about religion and social cohesion and the role and function of religion in society, to pave the way to the discussion of the teachings of Holy Qur'an.  It has been attempted in this article to criticize the social, anthropological, ontological, epistemological and methodological principles of Durkheim's theory. It is hoped that this paper will help scholars  benefit from the Quran as much as they can in scientific fields, especially in the humanities, and in sociology in particular.

and in particular for Islamized social sciences

The Concept of Structuralism; a Review of Levi Strauss and Saussure's Ideas / Mohammad Aslam Javad i/ Amir Nikpei

A Quarterly Journal of Sociology Summer 2010