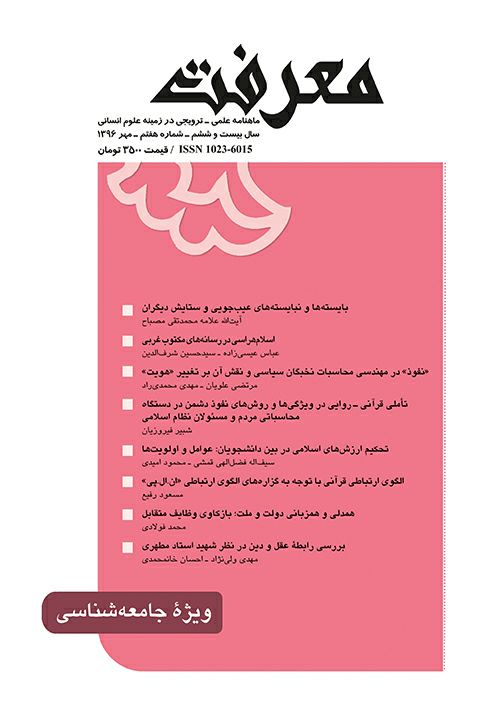 One of the characteristics of the Shi'ah to which the Commander of the Faithful, Imam Ali (pbuh) refers is that their state of mind when they are forced with problems and afflictions is the same as that in times of prosperity and when granted a favor. Just as common people feel contented in times of pleasure and comfort and do not complain, the pious and true Shi’ah seem contented and never complain in times of disaster and affliction. In these conditions they do not feel impatience or discomfort and, to them, being in trouble and being in prosperity seem to have no difference. This morality of in true Shi’ah is ascribed to their contentment with divine decree. They consider each of prosperity and trouble as Divine determination, and because these afflictions are predestined by God, they welcome them and do not complain.

The political philosophy of Imam Khomeini is a continuation of Islamic political philosophy by resting on a new approach to Sadra's philosophy, which firstly, rejects secular political philosophy and secondly, has significant differences from the formalist religious trend. The basic question the arises is; what are the principles on which this school of thought is founded which make it distinct from the other two paradigms?” Citing documentary evidence and using documental, software and reliable internet websites, this research seeks to establish and explain the epistemological, ontological, teleological and anthropological principles of Imam Khomeini’s political philosophy. The main aim of this paper is to underline how, in Imam Khomeini's view, monotheism plays part in political and social life. This research shows how the principles of this political philosophy are based on monotheistic ontology, epistemology on the Book of creation and the composed Book and anthropology on the two dimensional nature of man, which involves applying divine revelation to man’s political and social life, on one hand, and which is based on the rational findings and common sense of mankind in the social and political fields, on the other.

According to the political philosophy of the supreme leader, the desired political system is Islamic democracy. He proposes this theory by resting on different approaches, including political Fiqh (jurisprudence), political theology and political philosophy. The present paper uses an analytical method to explain this theory according to political philosophy and seeks to clarify one of the most important issues of political philosophy approach proposed by one of the most influential Muslim thinkers in a period when Muslim community is in desperate need of it. Resting on the principles derived from the sacred law of Islam such as monotheism in creation and ownership and divine eternal knowledge, the theory of Islamic democracy considers the management of society and government during the period of occultation as a divine act, and people are one of the pillars of legitimizing it and has such characteristics like attending to religious and moral education, offering service, bearing responsibility and taking notice of people's consent. The privilege of Islamic democracy that has proved efficiency over three decades is that, besides getting people's vote, it regards such criteria like knowledge, justice and governance to be necessary for the legitimacy of government and achieving human happiness.

Law and Its Ontological Foundations in Martyr Sadr's Political Philosophy

Law is one of the main topics of political philosophy. Laying out rigid and formal rules is one of the criteria and procedures of assessing a desired political philosophy. Formal and good rules are those rules that, cover all aspects of political society and that are quite consistent with ontology and anthropology too. This paper investigates the different laws in the political system of Islam from martyr Sadr's view. Concerning governance, the strict laws of Islam have a stable system that is consistent with the unchangeable features of the universe and have variable features which are suitable to the changing circumstances of time. Influenced by these features, Islamic law is based on the most important foundations of theology and anthropology, besides it is being comprehensive and suitable to all times and places. Because of their conformity with the laws of nature and existence and with requirement of man's nature, the laws of Islam are regarded highly desirable and comprehensive.

The Status and Types of Political Participation in Islamic Democracy

Politics or political sciences is one of the important disciplines of the human sciences, about whose relationship with religion there has been fierce debate among Muslims and non-Muslims. Using a descriptive method, the paper first makes a lexical analysis and then expounds Ayatollah Misbah's view about the relationship of religion with politics. The author focuses in this paper on establishing and explaining the theoretical principles of research including the quiddity and scope of religion highlighting the necessity of law and government, investigating the relationship between Islam and government in the two realms of lawmaking and law enforcement, and evaluating the arguments of the proponents of necessity of the separation of religion from politics.  According to Ayatollah Misbah, intellectual reasoning and canonical evidence show that politics is part of religion and an integral part of it. He belives that those who use the rich sources of Islam and study them closely and thoughtfully and without prejudice can clearly understand this relationship.