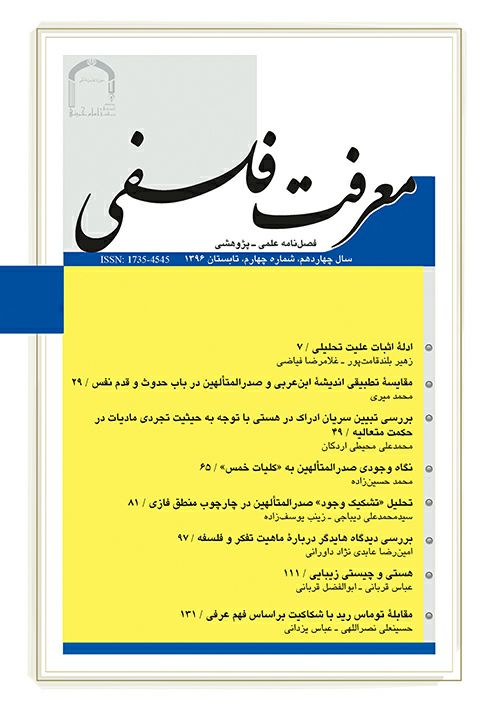 The Epistemological Bases of Human’s Ultimate Perfection in

Although there is no disagreement on the desirability of perfection, there are disagreements – both in practice and in theory – as to the notion of perfection itself. Most of these disagreements are rooted in the bases of discussion on human’s ultimate perfection. This disagreement on bases of ultimate perfection has led to the  emergence of various ethical schools. Among the most important of these bases are the epistemological bases. In the present article, we deal with the discussion on epistemological bases of perfection in Ayatollah Mesbah’s view based on which knowledge is a possible and even a realized affair and can be proved with a certain explanation. Besides, the devices for knowledge are not restricted to reason and senses; rather, revelation and intuition are among the main devices of human knowledge. In addition, according to Ayatollah Mesbah’s view, there is a necessary relationship between action and the goal of morality.

The Epistemological Value of Assurance in Comparison to Certainty, Conventional Knowledge and Suspicion

The analysis of epistemological value of ‘assurance’ is one of the most applicable discussions in epistemology. The solution to this issue is dependent upon the relationship between assurance and other grades of knowledge. The present article is seeking to give a new attitude about the validity of assurance, and has been organized in two general sections. In the first section, we refer to works written by philosophers, theologians and theoreticians in religious laws to compare assurance, knowledge and suspicion, and explain that assurance is joined to normal knowledge. In the second section, various views on criterion of assurance are evaluated, and it is clarified that assurance is not like suspicion which is invalid and needing to be validated; rather, it is valid just as normal knowledge. The research method in this study is documentary-analytical.

Obstacles for Truth of Existence to Accept Propositions

Previously in the article entitled “Existence Does not Accept Propositions” we proved with some arguments that existence (meaning the absolute reality) does not accept propositions, and it is not possible for it to have propositions. Thus, we may not consider existence (meaning the absolute reality with all its different perceptions) as the subject of prime philosophy. Now in the present article, which follows the previous one, we attempt to clarify the obstacles that prevent the existence from accepting propositions and becoming the subject of philosophy. Altogether, we have mentioned four obstacles in this article including a) non-plurality of existence; b) refusal of accidents in reality of existence; c) refusal of accident of ‘necessary by itself’ and ‘impossible by itself’; and d) and no demarcation for reality of existence. The present study aims at presenting the obstacles for existence to accept propositions in order to clarify that the subject of prime philosophy is not existence (meaning absolute reality with its different perceptions)

In the present article, the focus of study and analysis is the ‘matter’ as a common subject for science and philosophy. Accordingly, we first mention the views of some philosophers and authorities – both early and recent – on matter, and then we analyze the matter as prime matter, secondary matter, empirical matter and their relationship. The notion of matter in Islamic philosophy has not altered in centuries for long, and marvelous scientific findings in this regard have not influenced Muslim philosophers. Accordingly, these definitions have nothing to do with matter studied by empirical sciences. In the present article, we show that if we look at matter from a newer angle, we may find a proper relationship between argumentative matter in Islamic philosophy and the empirical matter in new science.

Definition, as the logicians say, is a mechanism for getting the unknown part in imaginations. For knowing something truly, there is no way except resorting to definition. Now the question is where and when definition can have such a usage. Finding a part of the answer will derive us to discussion about the conditions of definition, some of which are the formal conditions. Among the most important formal conditions of definition are the composition and the way the elements of definition are formulated. However, accepting these conditions necessitates more discussions; this shows the complexity of this discussion and leads us to the fact that definition is not just a logical discussion; rather, it has a philosophical and epistemological identity as well as linguistic dimensions.

Materialism and the Possibility of Awareness

Materialism is a kind of exclusivism in the realm of existence; it was first put forward, in the modern era, in the framework of mechanical philosophies and by relying on atomism. Although this version of materialism has little adherents due to the dogmatism governing it, materialist presuppositions are still strongly present in epistemology. The present article uses a critical perspective to investigate the implications of these presuppositions in relation to two parameters of awareness and free will. In this way, we will discuss the physicism, bahaviorism, computer model of mind, and naturalized epistemology as materialistic approaches present in contemporary epistemology, and finally we will review the common implication of these approaches, that is determinism and the possibility to predict individual and collective behaviors of human beings. The method of discussion is analytical, and the findings of this study stress the inefficiency of materialistic approaches in the realm of humanities.