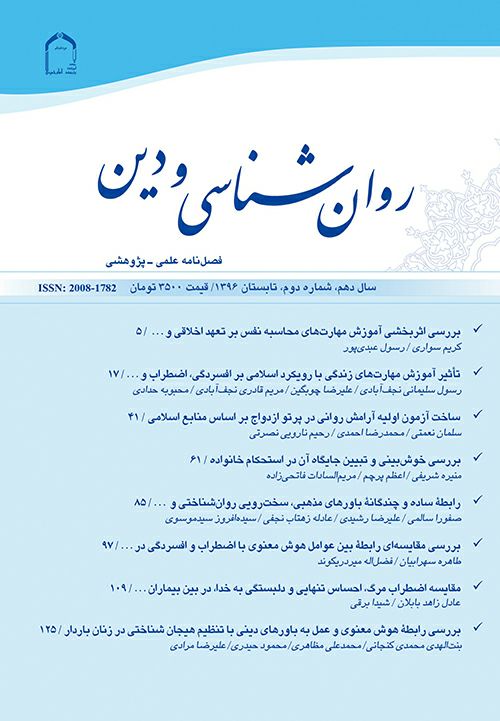 Forgiveness is a subject that has recently become focus of attention in psychology literature. However, few empirical researches have been conducted on this subject. The present study aims at investigating the effect of group couple therapy based on forgiveness on marital consent. The research method was experimental with a mixed design (inter and intra group). The research tools were as follows: (a) the scale for marital consent (Enrich) used as a valid research tool for evaluating potential problematic or strengthening backgrounds for marital relation, and (b) the scale for forgiveness, designed for assessing the level of forgiving the wrongdoer. The research sample composed of ten couples selected from among the indiviّduals referring to the consultation center. Five couples were randomly placed in experiment group and five others in control group. They were taught the forgiving skills for twenty hours. Analysis of variance showed that the experiment group, compared to control group, had a meaningful progress both in marital consent and in the forgiving skill, in the follow-up stage.

The present study aims at investigating the effect of religious teachings in preschool period. It used experimental method, and the results obtained from a researcher-made test conducted before and after teaching children, in experiment and control groups each with 50 subjects, were compared. Multiphase cluster sampling was used in this study. To do so, Mazandaran was divided into three regions, i.e. eastern, western and central, and two nursery schools were selected for each cluster, one as the control group and the other as the experiment group. The results show that religious teachings have meaningful effect on children's familiarity with religious concepts, religious rites, religious places, and their behavioral consonance with their parents.

Thought has a special status as the infrastructure of human behavior; to reinforce and reform behavior and identify its defects, it is necessary to identify thoughts. In view of the fact that thought is considered to be a formative, essential and useful axis, the present study poses the following question: 'Can we evaluate any thought as useful and formative, or there are also destructive and harmful thoughts that we must identify them and control their interference in the process of thinking?' The present study uses an analytical and descriptive method based on religious and psychological sources. It aims at investigating harmful and maleficent thoughts, such as closed thought, superstitious thought, and negative thoughts and mentalities called 'unadaptable thoughts'. The results show that unadaptable thoughts distance human being from the reality in the world, lead him astray, and become a mirage endangering him. Thus, we must defy emergence and survival of such thoughts. Methods for confronting disturbing thoughts depend on the type of the thought and a comparison of rational and irrational beliefs removable or controllable by concentrating on strong points.

The Role of Muharram Mourning Ceremonies

The present study is investigating the role of Muharram mourning in sexual abstinence of male students in Tehran universities in 1387-88 through a half-experimental method. The subjects were 104 male students in Tehran universities in 1378-88, selected as available sample. Half of the subjects were those who had participated in Muharram mourning ceremonies for two succeeding years. In this study, the questionnaire of sexual abstinence was conducted in two phases with an interval of one month (10 days before Muharram and 20th of Muharram). To control the interfering variables, another group (52 subjects) who were not resolved to take part in Muharram ceremonies and were negligent of those ceremonies in previous years were selected as the control group. The data were analyzed through dependent T-test and One-way Analysis of Variance. The results showed that the scores of sexual abstinence for the experimental group in post-test were meaningfully higher than their scores in pre-test. Such a meaningful difference was not observed in the control group.

The Relationship between Religious Orientation and Self-control

Studying the Status of "Spirituality"

in Major Models of Mental Health

The present article deals firstly with three previous models of 'health', challenged by emergence of a crisis in the sphere of health. The emergence of crises represent the proper time for coming to more advanced models of 'health'. Theoretical models of mental health, always ancillary to theoretical models of health, are also insufficient in explaining the related facts. Therefore, the scientific trend of psychology, with its negligence of spiritual dimensions in previous models of metal health, has been unable to be sufficient for describing, explaining and resolving the crises of mental health. Accordingly, it is necessary to establish a model with a consideration of spiritual dimensions. Of course, avoiding eclecticism and application of non-homogenous constructs inconsistent with spiritual dimensions, and paying attention to substantial difference between conceptions of 'soul', 'self', and 'spirit' are necessary.

In the name of Allah